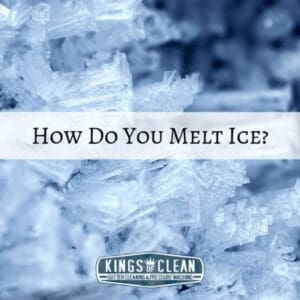 Snow and ice are unavoidable hazards in the winter months, and keeping your sidewalks clear and safe are a regular chore for most homeowners. Good news is that there are several options available. There are several benefits and concerns to remember for each, though. Today, we review each and help you decide on the best option for your home.

Most options to consider are chemical in nature. They work by combining with the water in snow and ice to lower the freezing point. How far the freezing point is lowered is determined by the chemical you choose. Sodium Chloride, or Rock Salt is the classic choice, and is usually the cheapest option you’ll find. Chemically identical to the table salt you use at home, but a less purified composition. Rock salt has two prominent downsides. First, because it’s simply salt, it doesn’t work at extremely low temperatures, around 10 degrees Fahrenheit rock salt ceases to be effective. When you do add rock salt to melt ice and snow, it will wash off into your yard and cause damage to your lawn if used in high quantities, so you want to be careful about where it’s applied.

After rock salt, calcium chloride is the next most common option for dealing with ice on your sidewalk. This works similarly to salt, but has a chemical property that allows it to work at much lower temperatures. In addition, there’s an unusual property of calcium chloride which causes it to actually give off heat as it comes in contact with snow and ice, this allows it to be even more effective at melting, working not only at lower temperatures but faster as well. The downsides to calcium chloride starts with the cost, it is much more expensive than rock salt. Where rock salt can sell for less than a dollar a pound, especially when bought in bulk sizes, calcium chloride can go for as much as two or more dollars a pound. It’s also worth noting that the chemical properties of calcium chloride mean it can pose a hazard to asphalt or concrete, meaning you’ll need to be cautious about the amounts used, following directions on the packaging as carefully as possible. Just like rock salt, calcium chloride can also damage your lawn and other plants if used in high amounts.

Urea is another chemical option often used to melt ice. It’s primarily used as a type of fertilizer, and as such doesn’t pose a risk to your lawn like sodium chloride and calcium chloride do. It’s also less harsh on asphalt and concrete, meaning less damage to your driveway or sidewalk than you might get with calcium chloride. Urea, however, is expensive. Costing as much as $1.50 or more per pound. It also doesn’t work at extremely low temperatures, it’s effectiveness stopping around 25 degrees Fahrenheit. Because of its reduced temperature effective range, urea isn’t often sold by itself, instead it’s usually found mixed with other chemical options to provide a safer ice melting alternative.

With all of the chemical options, you also need to be concerned about the environmental effects. Urea can reduce the oxygen available in waterways, killing fish and other species found there, while sodium and calcium chlorides carry the additional risks for pets that walk over them with exposed paws. Because of these concerns, non chemical options have gained popularity. Sawdust and sand are commonly used, while they don’t melt the ice, they do provide traction when you’re walking over treated sidewalks and driveways. Further, these options aren’t going to cause any risk to your yard when they wash away when the snow has melted. They may be unsightly if sand or sawdust accumulates when the spring melt comes, but you can always sweep them up for disposal if it’s a concern. These options don’t melt the ice though, so you’ll still have some safety concerns, they only provide a limited amount of traction. Another benefit is that when sand or sawdust gets tracked into your home, they can be vacuumed up, as opposed to chemical choices that may simply damage your carpet.

Regardless of the options you choose for treating snow and ice on your driveways and sidewalks, it’s always a great idea to get these surfaces cleaned by our professional teams when the spring melt comes, reducing build up that can cause possible damage to asphalt and concrete, so give us a call for a quote today!

How to Advertise on Your Sidewalk

Advantages of Sealing Your Driveway

How Does Salt Damage Your Home