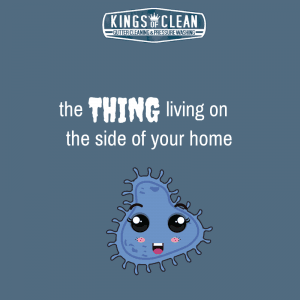 We were big fans of classic 1950’s science fiction double feature shows when we were kids, usually playing on cable on a Saturday morning, maybe on a show with a set of puppets in front of the screen making fun of the movie. These movies always cast to mind terrors from some other planet seeping into our lives, usually quietly and hidden at first only to grow massive and destroy the city later.

In reality there is a living being, rather entire colonies of living beings, growing on the side of your home. Feasting themselves on nutrients gathers from grime that builds up there, or even sinking their tiny little tendrils into the construction materials making up your home itself.

Mold and mildew broad names for related members of the fungus family. Both grow in places with moisture, and come in a variety of colors. They’ll tend to grow somewhere dark, you may notice mold or mildew on the external walls of your home concentrated on the northern side of your home as this is usually out of direct sunlight. This is only true in the northern hemisphere, if you live in the southern hemisphere the southern side of your home, if you live on the equator, the sun is directly overhead and no side of the home may be particularly shaded. Both can cause significant damage to your home, and release While the two words are often used interchangeably, they aren't the same thing. Mildew grows on the surface of a variety of materials, and often has a white or grey appearance with a powdery texture. Mold on the other hand grows into the lower layers of organic materials. It typically has a darker color, black, red, or green, and may appear fuzzy or furry.

Of the two, mold is the more serious danger to your home in the long term as it can cause construction materials in your home to rot as it feeds on the organic material found there. Both mildew and mold can cause health issues as they release spores into the air, but some molds in particular have been connected to a variety of serious diseases, in particular Stachybotrys chartarum, better known as “Black mold” which can produce certain toxins in the blood system and has caused serious illness in humans and death in pets.

Because mildew grows only on the surface of objects, it can be cleaned using water mixed with cleaner, being the most commonly used but other cleaners are specifically designed to remove fungal stains. Mold, however, grows into the deeper layers of material and requires a more thorough cleaning, in cases of a larger infestation it may be easier to remove the infested material and replace it with fresh construction. Either way, both mold and mildew only grow in the presence of moisture and may be an indicator of leaking water in your home. Because of this, you need to make sure the moisture issue is also addressed, otherwise the mold or mildew will return shortly.

If you find fungal growth on the outside of your home, there’s a very good chance it’s mildew since mold exclusively grows on organic material, though mold may occasionally grow on siding if enough organic grime has built up on the surface. Either way, a professional power cleaning such as the services we provide is one of the best ways to address the issue.

What’s the Difference in Siding?

Risks Your Home Faces in the Winter